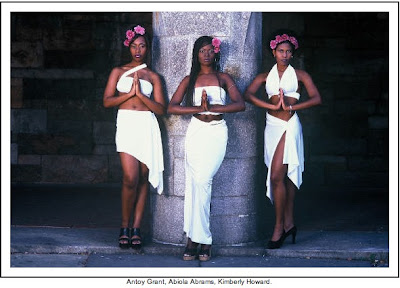 The very first professional project that I ever created was a hip hop theater play in the late 90s named “Goddess City.” The show was all about empowering women to see the goddess within. Themes and topics in the play include feminine power, goddesness, women of color, rape, the beauty myth, sexuality, female circumcision and the quest for self love and personal power.

The concept for “Goddess City” was born on the campus of Sarah Lawrence College. Ntozake Shange came to visit and share her work with us students. When I learned that she was only 25 when her seminal work, for colored girls, hit broadway, I remember thinking, I want to do that. I wanted to tell the stories of my generation to a hip hop beat. The show was successful because I was so fearless at the time. I was fearless mostly because I was too young to understand that what I was trying to do was supposed to be “impossible.”
I had been in a  rap group in high school named Females Beyond Control. (Yes!) I wanted to bring that power and rhythm to the theater stage. I met John Clancy of The Present Company through a high school connection. He gave me free rehearsal space when he read my writing and I set about the process of holding auditions. I was fresh from a series of humiliating audition scenarios in LA. My original vision was that of 7 rapping twenty-something divas.

The original name was “an auto/bio/graphic/al peace.” Then I met the fab Antoy Grant and eventually we wrote ourselves into our own goddess history with our three woman show. I remember us trying to explain that it was a hip hop theatrical concert experience and getting the reaction “huh” from most people! Daniel Banks was one of the few people that got it.

The three woman show will always be my baby as I co-wrote and co-performed it with my friend Antoy Grant. I was “The Goddess of Nerve” and Antoy was “The Goddess of Fever.” The third character, “The Goddess of Truth” was played by three different women at different times: actresses Kim Howard, Bridget Kelso and Rosalinda “Khuyki” Bermudez.
Our fabulous director and fourth goddess was Dr. Daniel Banks. Daniel recently published “Goddess City” along with several other hip hop theater plays in a new anthology named “Say Word! Voices from Hip Hop Theater.”

Don’t miss the NYC book launch on October 29: LaMama, First Floor Theater, 4:30-6pm, FREE!  I will join you in the audience to watch the words that I wrote from my soul on stage for the first time in 10 years. I can’t wait.
Come on out to the La Mama Theater to celebrate “Goddess City” and hip hop theater with us. La MaMa Experimental Theater, 74 East 4th Street, New York, NY 10003-8903.

P.S. Don’t forget to check out my sexy “Kiss & Tell TV” interviews with author Jackie Collins and Kissing Between the Lines’ Diane Farr.  Plus How to Make A Mojito Salad at Native Restaurant and Old Spice Guy Isaiah Mustafa!
Share
Tweet
Share
Pin