‘Re-ject!’ 5 Bold Ways to Eliminate Your Fear of Rejection and Live on Purpose

‘Re-ject!’ 5 Bold Ways to Eliminate Your Fear of Rejection and Live on Purpose

The real key is the lesson from The 4 Agreements. Don’t take anything personally. But many of us — me included — aren’t all the way there yet.

Your fear of rejection can block you in your relationships and as a sacred spiritpreneur and business bombshell. Here’s how to reject rejection if every single time it feels painfully personal…

Rejection can feel like a punch in the gut. Let’s talk about this invisible boogeyman that might be holding you back from being who you were born to be.

Truth: how many times has your fear of rejection held you back?

For me, the secret answer in more times than you can count. This is what is behind the perpetually getting ready, failure to launch issue that many of us have.

A couple of years ago, I ran into a TV producer in the City. She is an awesome woman who had booked me before for something huge. I credit her with opening big doors for me in my current work. She told me that she was working at the new “Bethenny” talk show that was about to launch. She said, “Send me your stuff and I’ll get you on early”

Of course I rushed home and sent my stuff ASAP, right? WRONG!

Nope! I emailed the amazing TV talk show and said that I would get in touch when my new book was complete.

I felt like I would be a more worthy guest with “The Sacred Bombshell Handbook of Self-Love” under my belt. Then my book launch got pushed back… and pushed back again.

Finally it was “perfect.” The book launched – and it has been life-changing for many women.

So did Bethenny like it? Who knows?!! By the time I finally “got ready” to send the producer my stuff for the show, it was cancelled. Opportunity blown, self-sabotage-style.

“Many of life’s failures are people who did not realize how close they were to success when they gave up.” -Thomas Edison

What would your life look like if you were free from worrying about the opinions of others? What if seeking the approval of other folks didn’t cross your mind? How would it change your beautiful life? Would you still need to be perfect?

Our lives are negatively influenced by the fear of rejection. It holds us back in so many ways and limits our ability to flourish.

Ready? It’s time to banish your fear of rejection.

(Feeling anxious about getting out there? I recommend EFT Tapping as a healing tool to clear this. I made a related video a year ago, I’ll post it below. Guided visualization is great for this, too.) 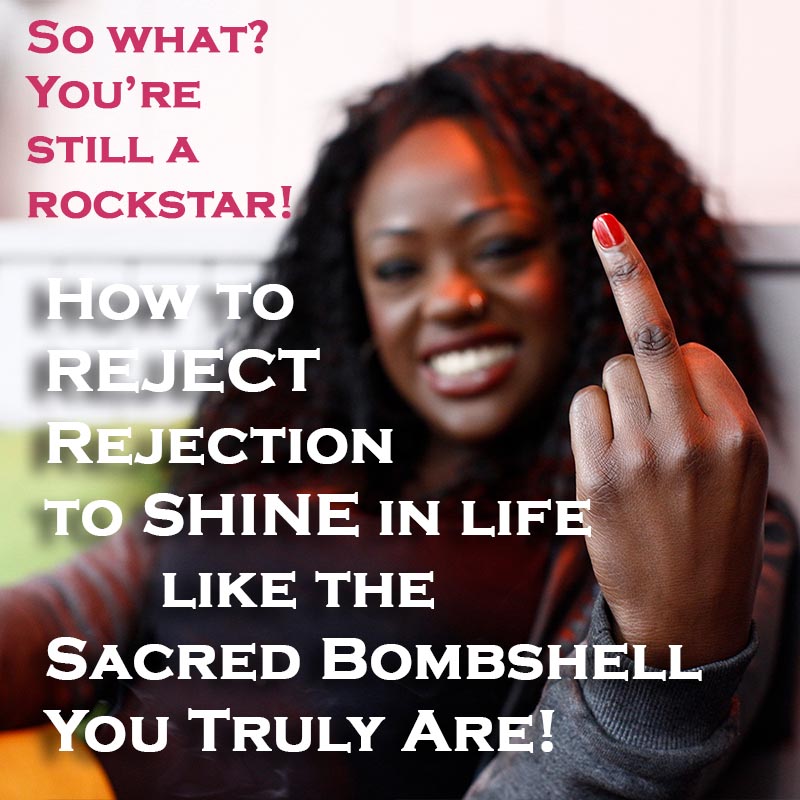 I really hate the middle finger. It is such an UGLY gesture. But rejection is ugly business.

“Eartha Mae is very shy. She’s scared to be seen, scared of rejection and even afraid of affection. Relationships can be rather uncomfortable for her. But, as Eartha Kitt, it’s fine.” –Eartha Kitt

How to Reject Rejection!

Most of us are in tune with how we don’t want to feel. Consider the opposite. How do you want to feel? It can be even more challenging to reach your positive objectives if you’re anxious, focused on the negative or not sure about what you really want.

Be specific. Ask yourself, “How do I want to feel?” about currently challenging situation. Then, take positive actions that will bring you the feelings you want.

That’s right. Action. Sitting around and contemplating will only create analysis paralysis.

2. Rejection is largely a self-fulfilling prophecy.

When we fear rejection, we often reject ourselves before life does. For example, when you’re constantly worried about rejection, it changes the way you act. You become nervous, anxious and defensive. You may even appear to be kind of shifty or unsteady. Those actions may cause you to be rejected by others. After all, who wants to hire, book, or spend time with someone who has bad energy?

Consider how this fear is affecting your behavior. Are you acting in a way that’s causing others to reject you? Are you rejecting yourself?

3. Use your imagination for positive rather than negative.

Worrying and visualizing are the same exercise. The question is are you using your imagination to empower yourself or to terrorize yourself?

So often, we often look ahead and imagine the worst possible scenario. Of course, this only adds stress to the situation — and you can doom ourselves to failure.

What if you saw yourself as successful instead? Imagine yourself rocking it! See YOU being confident, relaxed, and carefree. (Some of the meditations on The Sacred Bombshell Self-Love Meditations album are perfect for this.) If you do this enough times, it becomes a habit. You can rewire your brain by changing your thoughts. Let your imagination help you instead of hurting you.

4. What does rejection really mean to you?

Picture a gorgeous afro-haired child. She finds a random gold nugget in the dirt. The child doesn’t know what it is, so she tosses it. This doesn’t mean the gold nugget is worthless, but just that the person making the judgment doesn’t know its value.

Every single successful person was rejected at one time or another. (They were all ridiculed at some point too!) Oprah was told that she needed to change her name, her hair and her weight to work in TV. In fact, she was deemed, “unfit for TV.” Walt Disney’s first boss fired him because he “lacked imagination.” A theater professor told Harrison Ford that he would never be successful. At his first audition, Sidney Poitier was told, ““Why don’t you stop wasting people’s time and go out and become a dishwasher or something?” Beyonce and her girl group lost on the TV singing competition “Star Search.” Record companies even rejected the Beatles.

The point: Just because you have been rejected, does NOT mean that you suck. Sometimes other people make poor judgments, right? Don’t give the rejecter that much credit or credibility.

5. Don’t believe everything you think.

Just because we think it doesn’t make it a fact. What if all of your beliefs were true? You’d be a billionaire already and married to Idris Elba. (I would!) We all have false beliefs. These beliefs are highly limiting and steer you in a negative direction far more often than you realize. Question your beliefs. Of course you can be a billionaire and marry your own Idris, just be sure to question your thoughts.

Why do we have a fear of rejection? Being rejected sucks. Ugh. It never feels good. Rejection is one of the worst feelings in the world. But remember that you have some influence on whether or not you’re rejected by others. Also remember that rejection usually has WAY more to do with the person doing the rejecting than the one receiving it.

Recently, I have started to be grateful ahead of time. Rejection is protection. You may be being steered toward something greater. Don’t get stuck in the past.

Let’s approach life with the thought that expert sales people (and pickup artists!) have: “Every no brings me closer to a yes!”

Eliminating the fear of rejection is key to stepping into your greatness. When you are free of this fear, a whole new world will open up to you.