Love Advice Letter: ‘Dear Abiola, Help! I Think My Boyfriend Might Be Gay’

Love Advice Letter: ‘Dear Abiola, Help! I Think My Boyfriend Might Be Gay’

How’s your August going? I am still on my social media blackout and loving it.

I am sharing this Dear Abiola letter because I think it’s important that we have open communication with our boyfriends, girlfriends, lovers and loved ones about everything. For those not seeking committed love, be safe and enjoy. For those seeking committed love: if you don’t feel comfortable enough share your mind, then you may want to take more time before sharing your body.

You can also find my most recent Essence column here and my Mommy Noire posts on being sexy on first dates, single girl hookup rules and hot monogamy tips. I also have free gifts for you when you subscribe to the site.

I have also included a flashback interview that I did with talented writer Terrance Dean. If you can’t see the video below, click here to watch on YouTube. Terrance has been very open about his history as a former gay man on the down low in the hip hop music and entertainment industry. Stay cool. -aa

I’ve been in a relationship for three and a half months and I am wondering if my boyfriend is gay. I love gay men, I just don’t want to date one.

We live in Los Angeles and it’s expensive so he has a male roommate. His roommate is gay. That’s normal but what’s strange is that my boyfriend is always joking that they are like a married couple. They are very close; cooking and cleaning together, shopping together, clubbing all night together. He even says he misses the roommate every time he goes away.

Whenever I eat dinner or watch a movie at their apartment it’s always like the “Three Musketeers.” Together, they act ways in that I’m not used to. I have siblings and we don’t act like that. There’s a lot of dependency between them.

The roommate is always making catty jokes toward me like, “I’m going to hop in the shower with him,” meaning my man. He also has squeezed my boyfriend’s butt a few of times in front of me. My boyfriend just blushes and says nothing when these things happen. I asked him why the roommate did that and he said, “That boy is just silly.”

One day I surprised him at home and there was a small blood stain in the middle of his bed sheet. I asked him what happened and he said he cut his foot from walking around barefoot. I regret that I didn’t check his foot.

I know I can’t force a disclosure. I feel that I have to be careful to question his sexuality. I thought being patient and being more as an understanding person would have him to open up. I really need to know what is the best approach?

This has my soul uneasy and being in this relationship is making me feel rejected and not worthy. I have guessed maybe he has cheated with another man or a woman but I have a stronger belief that he’s been sexually active with his roommate.

There’s an old saying. If it walks like a duck and says, “Hi, my name is Daffy,” it’s a duck. That being said, the only way to tell that a man is gay or bisexual is for him to tell you himself. In his own way, maybe this is what your boyfriend is trying to do.

There are several red flags in your letter. The first is not broken gaydar, my queen, but that you are not trusting your intuition. Clearly you don’t trust your man, but the real problem is that you don’t trust yourself. This will continue to be a challenge after he’s long gone if you don’t address it.

You are not the “Three Musketeers. You are a grown woman trying to have a relationship with a man who seems like he’s already in one.

The second red flag is the behavior of the roommate and your man’s acceptance of it. There’s nothing wrong with a straight man having a gay best friend. However, the roomie’s boundary-crossing behavior is inappropriate. If his roommate was a woman, shower references and booty grabs would still be disrespectful unless you stated that you were open to those kinds of “jokes.”

Filmmaker and sex educator Arielle Loren’s acclaimed documentary “Bideology” addresses the topic of women dating bisexual men. She courageously takes a stark look at biphobia and why one should not stereotype or close the doors on dating a man just because he likes other men. However, you have firmly stated that this is not your preference.

If this is still someone you want to pursue a relationship with you need to have a straight up conversation. Be aware though that asking, “Are you gay or bisexual?” could lead to a closed door. Lots of men unfortunately still reject the terms “gay” and “bisexual,” when that’s what they are. They feel that they just “mess with other men” which is code for gay or bisexual. It’s best to ask at the beginning of a relationship, “Have you ever been intimate with another man?” and take it from there.

Tell your boyfriend: “I feel uncomfortable when Roomie is flirting with you.” You can continue with, “The intimacy with you two seems more than a friendship.” You can also ask whether the roommate has feelings for him and then ask how he feels about it.

Meanwhile, as you would with any partner, gay, straight or otherwise, please practice safe sex with a condom. According to the Centers for Disease Control, “African Americans are the racial/ethnic group most affected by HIV in the United States.” Safe sex is sex that is physically, mentally and spiritually safe. That can’t happen with someone who you don’t trust. 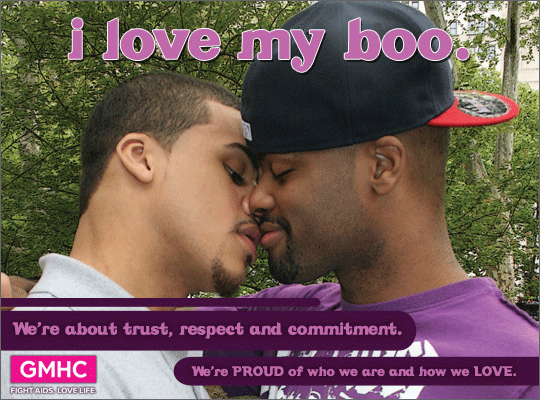 This is all a lot of suspicion for three months. You should not have to play detective to figure out why your boyfriend has bloody sheets. Don’t be afraid to cut your losses and head for the hills.The real deal, goddess, is that a woman’s intuition is her best friend. You deserve to be treated better than this.