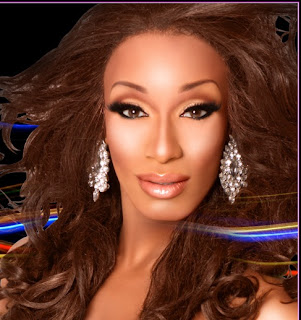 Today’s Kiss and Tell Report.
Viva la gays. Viva Miss Fag Hag. Viva NYC.
The second annual Miss Fag Hag Pageant took Comix NYC by storm last night. Created by comedian Shawn Hollenbach and sponsored by Bethenny Frankel‘s Skinny Girl Margarita, the bawdy extravaganza was well-directed and choreographed by Adolpho Blaire and co-produced by Paul Case. I was honored to be an official Miss Fag Hag presenter along with publishing powerhouse and Sirius Radio Host Judith Regan.
Judith Regan and I regaled the blessedly drunken crowd with schtick about our bootylicious Spanx-free bodies. Come on – it was only right that as a female drag queen that I was there, right? Judith and I introduced RuPaul Drag Race star Sahara Davenport who took the stage to give a Beyonce-worthy rendition of Tina Turner‘s Proud Mary. Homegirl was haute!
The contestants were also off the chain. Each potential queen was presented by her gay-in-waiting. They represented NYC neighborhoods; including my own village of Harlem. The top 3 contestants were Miss Bushwick, Miss Bowery and Miss Lower East Side.
And the well deserved winner, Miss Fag Hag 2010 is… Tanya Odebra! She tweeted today: “My first official proclamation as Miss Fag Hag 2010 is this: Duane Reade shall have a 2 for 1 sale on enemas! Keep thy butt hole homosexy!”

, along with my personal idols Michael Musto and John Cameron Mitchell who seemed to be getting their flirt on before the show!
Favorite Quotes from the Judges:
“You are the first biological female to do Liza- including Liza.” -Michael Musto
“I got skin cancer and crabs just watching this thing.” -Michael Musto.
“I think you should all star on Will & Grace, maybe win an Emmy. Oh Wait, that was me!” -Leslie Jordan
“I’ll be the Paula Abdul of the judges.” -John Cameron Mitchell
Miss Fag Hag 2010 was a benefit for the Harvey Milk School and the Hetrick-Martin Institute. I walked the fun swatch of red carpet dressed head to toe by Fatima Sidibé of Harlem Boutique Bebenoir. The Logo Network represented with a Big Gay Sketch Show presence.
After Miss Bowery Tanya Odebra graciously won, Heather Shields, Miss Fag Hag 2009 relinquished her crown, we all had a Skinny Girl Margaritas, and then sashayed away into the night.
—————
Come hang with me on Twitter @AbiolaTV.
Share
Tweet
Share
Pin