What it Means to Be Free! Let’s Talk About Personal Freedom (Diary)

What it Means to Be Free! Let’s Talk About Personal Freedom (Diary)

What it means to be really free… I wrote the Afterword for Ari Squires new anthology, “No More Chains.” Read it here. 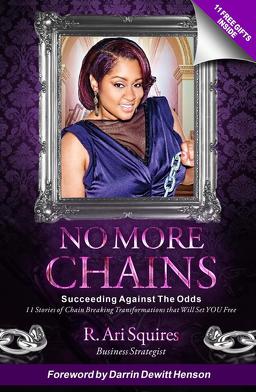 Releasing the chains that bind is far from easy. We all grew up hearing adults tell us to love ourselves, but we didn’t know what that meant. Most of the time, they didn’t know what that meant either. With all of the turmoil and strife that we face, this is a gift that we have that no generation who came before us ever had. Things are far from perfect, but we have the possibility to really be able to create a sense of freedom in our lives, whatever that means to you.

When I was born, my mother was a brand new immigrant. She came to America with $20 in her pocket. She cried when she arrived and saw how dirty New York City was because it didn’t look like the movies she had watched in her country. Although she and my dad come from the same small village in Guyana, South America, they met in Brooklyn. It was the 1970s. Afros were popping and so was politics. I guess it was kind of like this moment right now.

My parents were both raised by farmers. Their parents didn’t have time to talk about loving yourself. My mom’s dad only went up to the 6th grade, but somehow became the councilman of his village. My dad’s dad knew he wanted better for his son and urged my dad to pursue “book work” instead of farming.

Most of our great-grands and grandparents never contemplated that all things were possible for them. Many of us grew up with that idea already in the ether, even if it wasn’t in our households. In that way we are privileged. We have to acknowledge that. Let’s not take that privilege that was born on the backs of very hard working and often oppressed and silenced people and bury it.

When our neighbors who looked just like us bullied my family and told us to go back to our country, I couldn’t complain to my mom. Somehow, I knew that she had seen much worse. I knew that she was sacrificing to make a better life for me. I knew even as a kid that if I could release my own chains, I would be freeing generations past and future as well.

When my mother borrowed my flashcards to make her own to study for her American citizenship exam, I knew then that freedom ain’t free. We have to work for it – with everything we have. By hard work I am not just talking about sweat equity and hours accrued, I am talking about the inner work that will stop us from sabotaging ourselves. I am talking about getting out of your own way so that you can step into your greatness. I’m talking about making the calls, showing up for the meetings, being a leader and putting yourself out there.

In this book you have read the lessons of brilliant women and men who have overcome tremendous adversity. Usually when we think of success, we just see the end game. Hopefully, you don’t just admire what they have been able to do, but you take these lessons to release the chains in your own life.

Each of us has a story to tell. Everyone one of us has overcome something seemingly insurmountable. You have that in common with Ari Squires and with me. You also have that in common with Oprah Winfrey, Maya Angelou, Barack Obama and Muhammad Ali.
We don’t get to choose what life throws at us, but we do get to choose how we deal with it. Being bullied on a daily basis led in part to me developing extreme issues with anxiety. People ask how I can be on stages around the country or on TV worldwide and say that I have social anxiety. The answer is that my purpose is bigger than my problems. I am needed on TV giving advice so that a little girl somewhere who looks like me has one less excuse.

Do you think that if either one of my grandfathers had social anxiety they could take a week off from the farm? I have to step up because I was called and I am answering that calling. I am urging you to do the same. You are needed on the front. There is important work that you were born to do.

Self-determination, self-love, and self-worth don’t come bundled with the degree. The strength to keep going another day when things seem impossible are not attached to the certification. The will to keep going can only come from you.

When you feel like quitting, remember why you started in the first place. When you want to give up, think about whether you will be cheating others by retreating. Now, I’m not saying that you shouldn’t make a U-Turn. The road to freedom and answering your calling will be filled with U-Turns. Any success has also had a ton of failures. What I am saying is don’t take the failures as a period; see them as a comma and keep moving forward.

No matter who you are and what your story is, someone from your past paid for your future. Step up to the plate. You know how they say that we are the ones we’ve been waiting for? It’s true. The reason you keep thinking that folks are stealing your ideas is that you’re not stepping up. God gives us the ideas for what is needed in the world. If you don’t do it then someone else is called forward.
Stop asking people who don’t even believe in themselves to believe in you. Believe in yourself.
Each of us holds a piece of the sacred puzzle to make a corner of the world a better place. What are you going to do with yours?
Release the chains and move forward. I’ll see you on the frontlines.
-Abiola Abrams
Award-winning Author, Speaker, Coach, Founder of ManifestYourPower.com