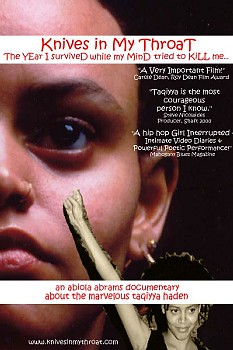 Today my documentary Knives in My Throat screens at the Reel Sisters Film Festival at the Harlem School of the Arts at 4:30PM today 9/14/08, where it is also the winner of Best Experimental Film. Yipeeee! This has been a looong time coming.

The film follows roughly a year in the life of Taqiyya Haden, at the time a 25 year old woman battling residual issues with family and foster care, suicidal tendencies, drug issues, being biracial, and bipolar disorder. It was a roller coaster ride of filming that afterward left both my soul, my mind and my pockets depleted, and Taqiyya and I not speaking with each other.

After editing down 100 hours of footage I then shelved it because I just couldn’t bear to deal with it. I not only couldn’t deal with the film, but the industry execs who told me things like, “It’s a great film but people don’t care about a black woman’s pain.” They didn’t see that this is not a black woman’s story, but a human story. Half of the film is about Taqiyya’s mother, who is Italian, and her issues with schizophrenia.

However, we had angels along the way like big time producer and teddy bear Steve Nicolaides who infused much needed money and positive energy at a time when I didn’t think I could go on. You see (duh, Abiola) making a film about depression is, well, depressing! We also had recent angels like co-producer AJ Muhammed and Super Intern Crystal Boyd who stepped in to make sure that the film was off of my shelves and in front of viewers.

I would love you to come check it out. You can read more, find a resource list and see film excerpts HERE, and I am proud to see that the amazing Taqiyya Haden is doing wonderful things with her life. We first worked together in my domestic violence experimental short film “Ophelia’s Opera.”

More about this in the future, I just wanted to share!