How to Handle Trolls

How to Handle Trolls 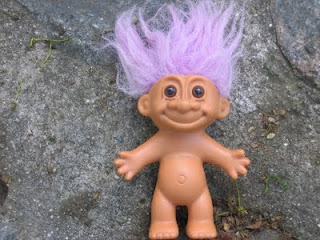 Hey Cupcakes,
When you’ve got anything on the bloomin’ interwebs trolls are a part of the ecosystem. There are different kinds of trolls — from malicious hacking trolls to less harmful know-it-all d*bags who anonymously assign themselves as “expert commenters.” That’s who we’re addressing here.


One of my recent Kiss & Tell TV episodes, Why Do Women Love Bad Boys, recently inspired ire from a special spate of trolls scientifically called Black-Girl-Hateramuses.


In my light, funny Bad Boys YouTube video, I can be seen hugging someone of a different race and playfully being “seduced” by his charms. Gasp. This is just the sort of thing that pisses the Black-Girl-Hateramuses. See, it’s pretty fabulous being born a chocolate queen, but for some reason it inspires everyone from Nightline and Steve Harvey to Chris Rock and Black-Girl-Hateramuses to think they know what’s best for you.


So these YouTube “gentlemen:”  DredgePhantom, Evens1 and the very modestly named NatTurnersAlive, left comments on the site about me being a “race trader” that included such gems as:


When I went to one of their YouTube pages – his videos were named: “The MisEducation of the Negro Woman,” “Black Women Take the S Off Your Chest,” “Black Women Need to Stop Blaming Black Men,” “10 Reasons Black Men Won’t Date Or Marry Black Women.”


It figures. Misogyny wrapped in racial pride is still misogyny.


Life is a Rorschach test. Miserable people see misery wherever they look. Where 99% of our audience saw funny Kiss & Tell TV episode about women, men, and relationships in general, a tiny few saw a “race trader” toppling their black manhood from underneath them. Sigh.


Everyone is entitled to their opinion, but my personal pages on the web are like my living room. In my living room feel free to disagree. I welcome dissent — like on my interview with Pick Up Artist Flyness – where a viewer told me to “shut up” so that he could get the info – whatevs. What is not welcome in my living room ever (aka my pages) is nastiness or personal attacks.


1) You block and don’t feed them. Don’t get into any kind of conversation with these people. You can’t be miserable enough to make anyone happy. They thrive on you arguing with or being upset by them. Again, trolls are not people who simply disagree with you. Healthy discourse is great. Trolls mean to cause harm.
2) If you must reply, respond to your audience in your arena– like this post.
3) Delete their comments. It’s like graffiti. If you leave it on your building you’ll attract others.


And to the genius troll who wrote that I probably know nothing about disadvantaged areas. The video you are viewing is in Harlem, oh brilliant one, and I grew up not far from where 50 Cent grew up. Try visiting my family in Guyana and using an outhouse then tell me about poverty.


4) And the last point for dealing with internet trolls, focus on your positive and amazing friends, fans and supporters. Like my Goddess Army fan base OF ALL COLORS & GENDERS that has had my back through BET, through VH1, though Dare, no matter what. Like I always say, I have the bestest fans, supporters and like-minded co-creators.


There’s nothing that you can ever do to be liked by everyone – nor should you want to be. So just be your crazy sexy cool weirdo self and give the haters something to squawk about.

Oh– and P.S. Black Girl Hateramuses, before you think you know me, do your research. Watch Black Women and Interracial Dating on The Planet Abiola Show and my short film TABOO: The Controversy of Black-White Race Mixing in America, for starters.